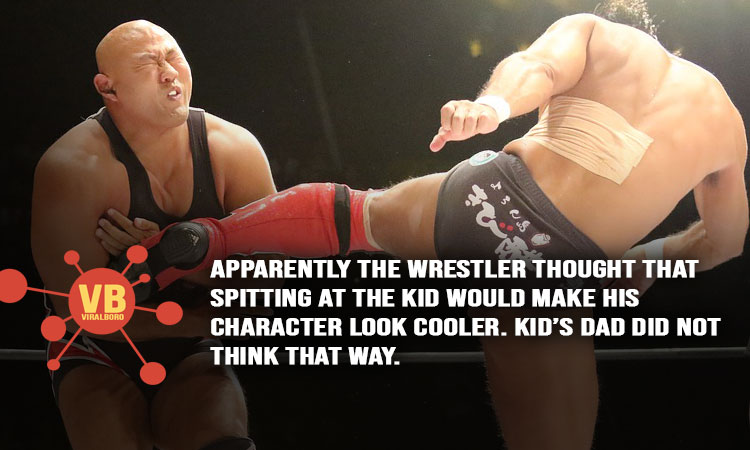 “It’s not real,” they say. The first time I saw episodes of WWE, it was translated from English to Russian, with very little explanation of the politics involved in the fights. The dialogue was realistic enough that I pictured these battles carrying on outside the ring. I can’t say I was a diehard fan, but I remember being truly upset when my biological father sat me down in our Moscow apartment and broke the news to me that it was a performance. “It’s not real,” he said. “These Americans pretend-slap.” After the veil went down, it wasn’t the same. Watching 200 pound American guys “pretend-slap” each other for fictitious reasons nearly killed my interest. Until I heard rumors that sometimes real fighting slips into these performances. Recently, a few viral videos have surfaced and while they aren’t WWE, they certainly challenge the notion that everything is staged.

Apparently the wrestler thought that spitting at this kid would make his character look cooler. His dad did not think that way. The father landed a couple of good ones on the wrestler.

I apologized to the girl & her father the night it happened.The gum wasn’t intended to hit her, that was an accident. I am again very sorry

Gum spitting is not the only thing that might attract some cloggin’ to your noggin’. This next recent video shows what happens when you think something is “not real,” and you are wrong.

It seems there is a little-known rule explained by the commentator in the video – “Do not get into the ring. This is real.” Who could have known that slapping testosterone-raging 200 pound men in tight suits would be a mistake?

And my biological father thought wrestling was fake. The joke is on him!